What is a Citizens' Jury? 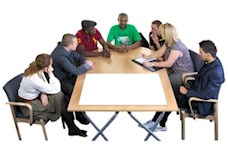 A Citizen’s Jury is a method of deliberation which involves the voices of a broad range of voices. Citizens' Juries generally consist of 12-24 members who represent the demographics of an area. The Citizens' Jury model was developed in the 1970’s by the Jefferson Center, but organisations have adapted this model in different ways to suit their needs.

Citizens' Juries can discuss a range of topics, but are particularly good at engaging with complicated issues. For example,  The National Data Guardian and Connected Health Cities commissioned a Citizens’ Jury to better understand what patient data sharing scenarios can be ‘reasonably expected’ in the eyes of the public. The aim of a Citizens' Jury is to move beyond discussion or opinion sharing to deliberation and decision making.

‘Deliberation includes exchanges between two or more people around a common topic with back and forth reactions to each other’s views, puzzling over an issue to work something out collectively, the sharing of reactions, trying to understand the position of others, a willingness to be persuaded by another’s position. There is the possibility of disagreement, conflict and argument and discussion of that disagreement. Ideally all this discussion should lead to a consensual resolution or of conclusion to the question being explored’ (Davies et al 2006).

The Research Voices project developed an adapted Citizen’s Jury which had many of the same core principles of a traditional Citizens' Jury, but was made more accessible for people with learning disabilities. Some of our adaptations included the use of inclusive communication approaches (Talking Mats, for example) and the inclusion of development days to support jurors to better understand some of the concepts being discussed, as well as develop the group’s question asking and listening skills.

One key way in which the Research Voices Citizens' Jury differed to others is that as the organisers, the Scottish Learning Disabilities Observatory made the decision not to set a question for deliberation. Instead, the group developed their own question for deliberation with support from facilitators, taking on board the learning from a round table discussion with stakeholders in health research.

This is an acknowledgement that people with Learning Disabilities already have limited involvement in health research, and have likely never had the opportunity to set their own agenda for discussion on the topic.

Part of the learning from this project will about the feasibility and effectiveness of this model, and whether adapted Citizens' Juries may be a valuable way to engage with people with Learning Disabilities on other subjects.

Further information on Citizens' Juries can be found below: