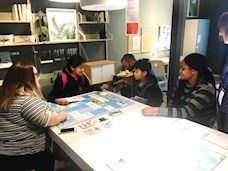 On the 4th of November 2017, researchers (Laura, Phillippa, Ewelina and Marian) from the Scottish Learning Disabilities Observatory set off to IKEA in Glasgow to take part in the ESRC ‘Festival of Social Science’. The purpose of the festival was to engage with members of the public and especially young people, about the kind of social science research that takes place at the University of Glasgow.

The team at the Observatory were really pleased to be able to take part. We wanted to develop a way of communicating our research to young people in particular and decided that a table-top game would be an exciting way to showcase what we do. We used this method to present practical examples of barriers faced by people with learning disabilities in achieving equality in health and other areas of everyday life.

We developed a game that involved players going progressing round a board that represents all of the key aspects of a person’s life: going to school, going to university, getting married and having children for example. We started to think how these things can be made harder for people with learning disabilities so we came up with ‘The journey through life with a learning disability’!

Players could go round the board and encounter the positive and negative things that people with learning disabilities experience every day. Depending on what you land on or the kind of card you pick, you can either progress through the game or go backwards. The cards and the ‘life encounters’ on the game were based on the research findings that we have collected at the Scottish Learning Disabilities Observatory. For example, a player could pick up a health card which says:

You need see your GP but they don’t have accessible information for you, move back 2 spaces

You make an appointment with your GP and they give you a longer appointment to make it more accessible for you, move forward 3 spaces

The cards also covered topics such as education, employment, family life and social life. We wanted to make sure that the game demonstrated the impact of social, economic and health barriers on lives of people with learning disabilities in Scotland.

Throughout the day lots of IKEA customers took part in our game. Many of our participants were young children and we were happy to see that they enjoyed the game but also understood the information we were trying to share. Adults were also keen to get involved and were interested in learning about the inequalities that people with learning disabilities face.

The event was a great success and everyone who took part was pleased to learn more about what we do at the Observatory.